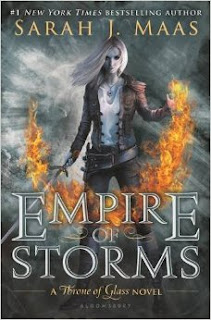 So I finished EoS a few day ago and this is what I have to say about it:
Non-spoiler section:

This book  was awesome, tumultuous, heart-wrenching, and addictive to sum it up. For the few days it took me to read it, I was ready and willing to neglect my homework so that I could keep reading. I got QoS a few days after it came out and tortured myself then as well by finishing it ASAP and my year long wait  is over! (But its starting again now). Seeing Aelin & co. again was great. I love delving into their world and experiencing their dynamic. Sarah J. Mass did it again by trapping my attention and making me want more and more. Half of the time while reading this book, my mouth was agape. I was shouting, I was laughing, I was experiencing every emotion under the sun. Definitely give this a read and let me know how you like it!

**SPOILER SECTION**
Okay, for those of you have read Empire of Storms, lets get to it. This book was friggin' amazing and I'm pretty mad that I have to wait ANOTHER year for the finale. I'm gonna bullet point this so it doesn't look like an essay (which I was tempted to write).


Now I have read some complaints about EoS from other book lover and everyone is entitled to their opinion and no book is perfect. But I have to say:

If you read the book let me know what you think down below!!