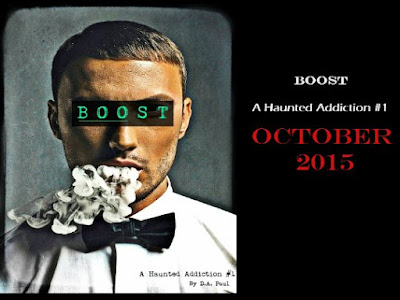 They call it a boost.It’s the buzz you get from absorbing the spiritual energy of the dead, and it absolutely terrifies Lidia Powell. Shortly after meeting Ander at summer camp, Lidia is thrust into the world of psychic mediums and brought to a new school. At Mountain Heights Academy, even a casual pizza-date is accompanied by a ghost, and only a frightened uberdork would refuse the boost. To Lidia, the peer pressure to absorb phantom apparitions is horrifying, but to everyone else, it's the drug of choice. However, when one of the students delves into dark energy, Lidia suspects that a boost isn’t as innocent as it seems. Soon, the boost becomes an addiction and Lidia must act fast before the changes become irreversible.


I originally received this book in July by D.A. Paul in exchange for an honest review. I wanted to wait until October since it's a book involving ghosts and all things that go bump in the night.
Why is the cover sooo cool??

This book was awesome. In high school I mostly read paranormal stories instead of fantasy like I do now. And boy have I missed it.
Boost is an amazing book. I really love the concept behind it of being able to see ghosts. Yeah I have read other books with this aspect before, but they surely weren't trying to absorb any energy from them. That's what really drew me in to the book. I felt that it was such a fresh concept.

Since this book is apart of my October TBR, I just picked it up the other day, and now I'm done. I actually could not stop reading. I looked at the clock last night and saw it 4:05am and I still didn't want to sleep! I was too hooked on the story. Shoot, I was the addicted one.

Lidia is our main character in the book and she is pretty cool. She isn't some fearless warrior per se but she is not a coward either. If she does not think that something is right or just, she will speak on it and do what is right. And I really appreciate that about her. Being thrust into a world that was not her, and where she felt she did not belong, she handled it pretty well in my opinion and tried her hardest. As for Ander, I really liked him too. I thought he was pretty funny and a quick thinker. He is showing Lidia the ropes to a world she never even knew existed, since she is pretty late in the game.
I don't want to say too much and spoil and of the good details.

Because the worlds where boosts and ghosts exists is new for Lidia, of course she has to be shown the ropes and Ander does this. I would have liked it more if some of the thins were not explained to us as if they were in  a text book. Perhaps if it was in dialogue instead. Also I wish we would have introduced the ghost seeing aspect a little earlier. I feel like Lidia should have been randomly seeing them her whole life instead of suddenly at 16. Unless I was too eager to flip through the pages and missed something.

I recommend everyone to give this book a try and just see what I mean by it. There are ghosts, being being high, teenage language, a love triangle, and some people who end up doing some very bad things. I am so glad that I was given the opportunity to read this amazing book! So thank you to D.A.
And I would like to when the second book is coming out so I can get it immediately :)