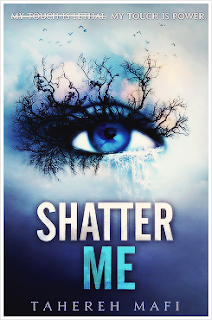 I have a curseI have a giftI am a monsterI'm more than humanMy touch is lethalMy touch is powerI am their weaponI will fight backJuliette hasn’t touched anyone in exactly 264 days.The last time she did, it was an accident, but The Reestablishment locked her up for murder. No one knows why Juliette’s touch is fatal. As long as she doesn’t hurt anyone else, no one really cares. The world is too busy crumbling to pieces to pay attention to a 17-year-old girl. Diseases are destroying the population, food is hard to find, birds don’t fly anymore, and the clouds are the wrong color.The Reestablishment said their way was the only way to fix things, so they threw Juliette in a cell. Now so many people are dead that the survivors are whispering war – and The Reestablishment has changed its mind. Maybe Juliette is more than a tortured soul stuffed into a poisonous body. Maybe she’s exactly what they need right now.Juliette has to make a choice: Be a weapon. Or be a warrior.

Yes I know. The amount of old but great series that I am just starting is astounding. But its okay, cause better late than never is how I go about it.
Now on to the book.

Wow. Tahereh Mafi's writing blew me away. I fell in love with it almost immediately. It was so compelling and enticing from the very start. I was hooked before I could even blink.
One thing that I absolutely loved was how she would have scratched out some of the words when Juliette would think something, and but say something else or rethink it. I loved it because it so realistic to how we actually think or choose not to say/think about something.

The story itself was such an interesting one. Juliette who had been mentally and emotionally abused for most, if not all, of her life. That would break most people. Drive them to hurt those who hurt them, or to just give up completely. But once Juliette sees her silver lining, she goes for it an it makes her all the stronger

I will admit the love interest did not make me swoon once I finally got to that part. And to be honest something I read is making me feel a little wary toward him, but perhaps I'm being dramatic. Every now and then it takes the second book in a series for me to love the guy and to see just how awesome he is and this could very well be that case

I cannot wait to read more about Juliette and see the development of her power in Unravel Me.

If you've read this series or any books in it, let me know below! Even link a review!