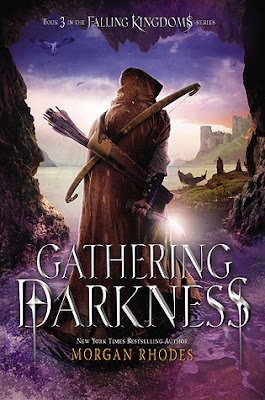 In GATHERING DARKNESS, book three of the New York Times bestselling Falling Kingdoms series, the stakes have never been higher as three teams push forward on a race to find the Kindred, the four elemental crystals possessing ancient all-powerful magic, first:Prince Magnus has just witnessed torture, death, and miracles during the bloody confrontation that decimated the rebel forces. Now he must choose between family and justice as his father, the cruel King Gaius, sets out to conquer all of Mytica. All Gaius needs now are the Kindred - the four elemental crystals that give godlike powers to their owner. But the King of Blood is not the only one hunting for this ancient, storied magic...• THE KRAESHIANS join the hunt. Ashur and Amara, the royal siblings from the wealthy kingdom across the Silver Sea, charm and manipulate their way to the Kindred, proving to be more ruthless than perhaps even the King of Blood himself.• THE REBELS forge ahead. Princess Cleo and vengeful Jonas lead them, slaying with sweetness, skill, and a secret that can control Lucia's overpowering magic - all so they can use the Kindred to win back their fallen kingdoms.• THE WATCHERS follow Melenia out of the Sanctuary. They ally in the flesh with King Gaius, who vows to use Lucia's powers to unveil the Kindred.The only certainty in the dark times is that whoever finds the magic first will control the fate of Mytica... but fate can be fickle when magic is involved.


This book series so far is one of the best things since sliced bread and I'm loving it. Calling it the Game of Thrones of YA hold SO much truth. You never know who is going to live or die, who will be spared or betrayed by someone close to them. And as the titles of the series suggests, kingdoms are always falling.


I read this book in a day and half if that is any indication of how good it was. I couldn't out it down and then the next thing I knew, it was over! The third book of this series exceeded all of my hopes and more.
I must commend Rhodes on getting everyone up to speed with everything that happened in the past two books. Even if you only read the books two weeks apart you're bound to forget something, but never fear!

The fact that I could never quite tell what was going to happen made me want to find out more. The amount of intrigue I got from this book was astounding. This book was very fast-paced and full of action.There were so many plot twists that it made my head spin, but it was welcomed! The way I can be so attached to a character one moment then see who they truly are and wishing harm against them is amazing!
When it comes to ships, I have never been more confused and undecided as to who I want together. my INITIAL ship three books ago sunk before it could even test the waters. Now I still don't really know what I want. But I might as well take what the books is going to give me.

In Gathering Darkness, the character development was great. Cleo is really coming into her own and figuring out how to manipulate all of those who stand in her way of reclaiming the throne. She has become so much stronger mentally and actively displays her cunning and wit. Magnus is having a rally hard time accepting his role and the son of the King, brother to Lucia, and husband of Cleo. He does not know who he should be or what she should and shouldn't feel. Though there are some choices he made that made me angry, I can't say he hasn't grown on me. I used to be simply indifferent toward him, especially after a certain person he killed. I felt like I did not see too much of Jonas, but what I did see was the typical Rebel leader who values everyone under his care and will do anything possible to get King Gaius out of commission.

Do not hesitate to pick up this book if you haven't already. This is a great read that you won't regret!
If you've read it, let me know below!