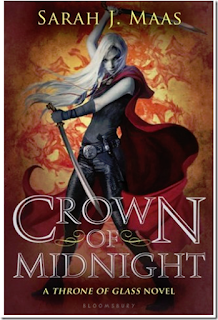 From the throne of glass rules a king with a fist of iron and a soul as black as pitch. Assassin Celaena Sardothien won a brutal contest to become his Champion. Yet Celaena is far from loyal to the crown. She hides her secret vigilantly; she knows that the man she serves is bent on evil.Keeping up the deadly charade becomes increasingly difficult when Celaena realizes she is not the only one seeking justice. As she tries to untangle the mysteries buried deep within the glass castle, her closest relationships suffer. It seems no one is above questioning her allegiances—not the Crown Prince Dorian; not Chaol, the Captain of the Guard; not even her best friend, Nehemia, a foreign princess with a rebel heart.Then one terrible night, the secrets they have all been keeping lead to an unspeakable tragedy. As Celaena's world shatters, she will be forced to give up the very thing most precious to her and decide once and for all where her true loyalties lie... and whom she is ultimately willing to fight for

Wow. What a sequel.
I think Sarah J. Maas is in danger of being sued for pain and suffering, emotional instability, and over all mind blowing content.

Celaena has easily become one of my favorite characters. She is such a bad ass! She is the friggin' Assassin of Adarlan and King's  Champion. And one with a conscious all of a sudden I might add. She has the Crown Prince and the Captain of the Guard, two of the most eligible bachelor's, eating out of her hands! Let's not even mention her love of books So much accomplished at eighteen. I'm behind compared to her.

Now the King is a scary and intimidating dude. He does what he wants to and does it well. I think the king and the Commandant would get along swimmingly. Celaena barely wants to cross him and we all know what she's capable of. But we really see what she can do when she is royally pissed. WARNING: DO NOT PISS OFF A DEADLY ASSASSIN. Like how stupid are people really?

Speaking of which JUSY WHHYYYY??!!! There is one part of this book that absolutely....ugh...If I were a crier I might have shed some tears. This book has one hundred and one plot twists that I did not see coming at all! Well Done Maas. Well done. Because some things are foreshadowed, but so subtlety that when it hits you, you're dumbfounded and caught off guard.

And the feeelsssss. The fangirlinggg. I have a new team now and I need a banner immediately to add to my collection. I' have been for this couple from the very beginning and HA I was right.

This is such a great read and highly recommend it. Yet another series to obsess over.