The Invasion of the Tearling Review 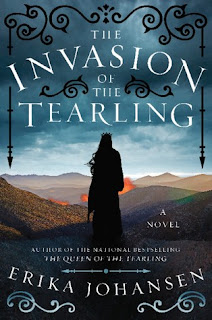 With each passing day, Kelsea Glynn is growing into her new responsibilities as Queen of the Tearling. By stopping the shipments of slaves to the neighboring kingdom of Mortmesne, she crossed the Red Queen, a brutal ruler whose power derives from dark magic, who is sending her fearsome army into the Tearling to take what is hers. And nothing can stop the invasion.
But as the Mort army draws ever closer, Kelsea develops a mysterious connection to a time before the Crossing, and she finds herself relying on a strange and possibly dangerous ally: a woman named Lily, fighting for her life in a world where being female can feel like a crime. The fate of the Tearling —and that of Kelsea’s own soul—may rest with Lily and her story, but Kelsea may not have enough time to find out.
In this dazzling sequel, Erika Johansen brings back favorite characters, including the Mace and the Red Queen, and introduces unforgettable new players, adding exciting layers to her multidimensional tale of magic, mystery, and a fierce young heroine.

I have to start by giving a shout out to Audible because I listened to both audio books from this series.  I preferred the first narrator to the second but it was still well done nonetheless.

So this book is a continuation of where we left the Tearling in the last book. War and siege is on the horizon and Kelsea has to evaluate the decisions she's made. Despite being only nineteen, she has to do a lot of growing up because she is the Queen of this place that is in utter shambles.

So Queen Kelsea does everything that she can to prove that she isn't her mother that sold away her people to a witch queen. But we also come to realize her mother may have not really had a choice. There is a slight possibility that Queen Elyssa knew giving away her citizens was the lesser of two evils. I felt bad for Kelsea because she is forced to realize that though she stopped the shipments with great intentions she is still the cause of the Mort coming to invade the Tearling. And she doesn't even have a clue that the Red Queen only did it because her citizens kept questioning her! She almost didn't give a damn.

I loved all the insight we got to the past Raleighs, the power of the Sapphires, and the friggin' Pre-Crossing! That was just awesome! How Johansen imagines America in the future is something I certainly don't look forward to. But I can certainly see it. It was so well thought out. It was almost as if it was two books in one.

WHO IS HER FATHER?!?!?! WTF! It better be in the first sentence of the third book. What is the huge secret if he was "a good man"? Also, Kelsea is do damned stupid for basically selling her soul to the devil! I realized everything that transpired with Kelsea and the Red Queen would have happened regardless because she remembered her FROM THE PORTRAIT! So all the fireplace dude did was slightly gear her in the right direction! Once she saw her she was going to say "Hey. I remember you. You're the sad looking Raleigh bastard child I saw a week ago." Then BAM she would have had her. So Frustrated.

I loved this book and once again I'm going to hate waiting a year to find out what the fate of Kelsea, her sapphires, and her kingdom is.