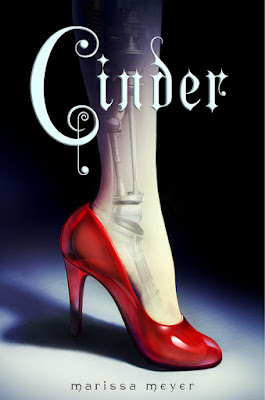 Humans and androids crowd the raucous streets of New Beijing. A deadly plague ravages the population. From space, a ruthless lunar people watch, waiting to make their move. No one knows that Earth’s fate hinges on one girl.Cinder, a gifted mechanic, is a cyborg. She’s a second-class citizen with a mysterious past, reviled by her stepmother and blamed for her stepsister’s illness. But when her life becomes intertwined with the handsome Prince Kai’s, she suddenly finds herself at the center of an intergalactic struggle, and a forbidden attraction. Caught between duty and freedom, loyalty and betrayal, she must uncover secrets about her past in order to protect her world’s future.

Yes, this is another amazing book series that I am several years late getting to. I know I know. But better late than never right? And I am sooooo glad I did. This book was amazing!
This year I have come to find myself really enjoying the fairy tale retellings and this one does not disappoint. The concept is so intriguing  and that is what makes it special. It is its own story, while being loosely based on Cinderella. It is an old story in an awesome futuristic setting. And to be honest I'm not always one for books set in a futuristic kind of dystopian time.

Once I picked the book up, it was really smooth sailing from there. I would look down and see that I have read so many more pages than I thought, in short amounts of time. The book flowed so well that it was hard to not keep reading the little masterpiece.

And the plot line that Meyer came up with! Cinderella definitely wasn't on the run from people living on the moon. And the ENDING! I did not see that coming! And it was hinted at just enough in case you were able to find out

This is a great read and I'd highly recommend it. Now I need Scarlet! I want to have all of them done before Winter!