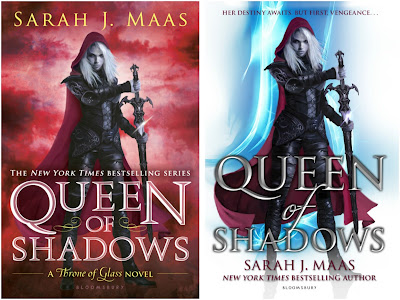 Everyone Celaena Sardothien loves has been taken from her. But she's at last returned to the empire—for vengeance, to rescue her once-glorious kingdom, and to confront the shadows of her past . . .

Celaena’s epic journey has captured the hearts and imaginations of millions across the globe. This fourth volume will hold readers rapt as Celaena’s story builds to a passionate, agonizing crescendo that might just shatter her world.

This book was so friggin amazing. There is no other way to say it but that. Phenomenal, superb, fantastic, just wow. Now let me tell you why

This book had m booked from the first page. I only put it down when I absolutely had to, like when teachers were staring at me for reading in class or it was 4 in the morning and I had three hours to sleep.

For one I would like to say I have never encountered a main character that goes through a name change in a book or series. But I felt it to be necessary due to Celaena finally accepting who she is and what she had to do. In this book, Celaena is bad ass as hell! You really get to see how cunning, ruthless, cut throat, and intelligent she is. Though we have seen all of these aspects from her in the previous books, it has only been in snippets. At this point, she is done playing games and she is out for blood. Also, it seems no matter what corner she is pushed into, she is always three steps ahead and all you can do is marvel at how well she is at predicting how things turn out and making them go in her favor.

This book was action packed from the beginning. Many parts had my heart racing and had me on the edge of my seat, trying to figure out the fate of Celaena and the friends we have come to know. And new friends we were introduced to as well. I just want to get off my chest, I HATE CHAOL IN THIS BOOK. There I said it. He pisses he off soooo much. I never thought I'd be able to say that. I have been on Team Chaol since ToG! He really started pissing me off in HoF but I hadn't pushed him away just yet. A few chapters in to this book I'm like fuck you Chaol! I stopped hating him toward the end of the book because he was not being a prick anymore, thank the gods (a very QoS like term).

So we come to Manon Blackbeack. I love her so much. Is she a bloodthirsty witch that will kill a human without second thought because she can? Yeah. So? Though she is Wing Leader, based on her interactions in the last book, especially with Abraxos, we all know shes NOT her grandmother. So that's good. But happens when a crippled little human walks into her life? Well... you'll have to see for yourself.

The plot line to this book is so thick I could slice it with a knife. Sarah J. Maas is just a amazing as she weaves her story and captures us in it. But we willingly go. I won't say there are necessarily any huge plot twists in this book, but there is some really good information that he find out. This information puts us closer and closer to finding out how things are going to play out for our Assassin Queen and her court.

If you haven't read the book, read it. If you haven't started the series, start it, like now. If you read this too and feel the same way, let me know below!