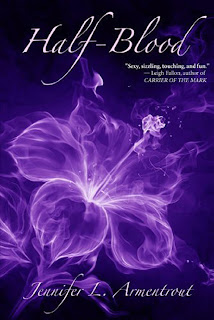 The Hematoi descend from the unions of gods and mortals, and the children of two Hematoi pure bloods have godlike powers. Children of Hematoi and mortals--well, not so much. Half-bloods only have two options: become trained Sentinels who hunt and kill daimons or become servants in the homes of the pures. Seventeen-year-old Alexandria would rather risk her life fighting than waste it scrubbing toilets, but she may end up slumming it anyway. There are several rules that students at the Covenant must follow. Alex has problems with them all, but especially rule #1:Relationships between pures and halfs are forbidden. Unfortunately, she's crushing hard on the totally hot pure-blood Aiden. But falling for Aiden isn't her biggest problem--staying alive long enough to graduate the Covenant and become a Sentinel is. If she fails in her duty, she faces a future worse than death or slavery: being turned into a daimon, and being hunted by Aiden. And that would kind of suck.

I personally really like this book. It was action packed, it involved Greek gods (which I LOVE), and I liked the characters. There was just one very big problem that demoted it a star....IT WAS EXACTLY LIKE VAMPIRE ACADEMY! This was my first Jennifer L. Armentrout book and all I could say was "Really?" It was like when an old movie is redone with characters of different names, yet the same personality, and the plot is slightly different. So I really knew all that was coming before it even happened. Luckily I loved Vampire academy, it was just annoying to continually compare the two while reading.

I love Alex's personality. She is all or nothing, do or die. When the going gets tough, he keeps on kicking and she doesn't not give up. She definitely is not weak. Despite this she does not have a problem admitting to herself when she is wrong or she screwed up, admitting it out loud is a different subject though. She went to hell and back without really complaining or whining. Some realities were hard to grasp but she would eventually get the message.

Aiden is bae to put it simply. He isn't too rigid,  not too carefree, but juuustttt right. I appreciated that he didn't come off as completely void of emotion when his actions spoke otherwise. If they did, it was because he had to force himself to do so. He is much like Alex in the aspect of having to bounce back quickly from his tragic childhood. The Pure turned Sentinel did what he had to do to keep his family going and to keep purpose in his life.

I could not help but enjoy this book. Anything with the Greek gods in it, I'm on board. I want to see how much of the series continues to mimic the Vampire Academy series. That does not mean this book/series is not worth the read! Because it really is, especially if you haven't even read VA. Just go in with an open mind and an understanding heart (or something like that). From what I've read from  J. Armentrout I have enjoyed. Give this one a try!
Posted by Unknown at 3:26 PM