Daughter of Smoke and Bone Review 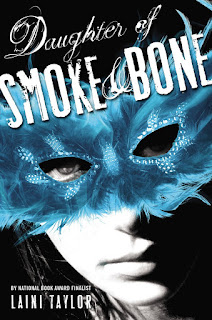 Around the world, black hand prints are appearing on doorways, scorched there by winged strangers who have crept through a slit in the sky.In a dark and dusty shop, a devil’s supply of human teeth grows dangerously low.And in the tangled lanes of Prague, a young art student is about to be caught up in a brutal other worldly war.Meet Karou. She fills her sketchbooks with monsters that may or may not be real, she’s prone to disappearing on mysterious "errands", she speaks many languages - not all of them human - and her bright blue hair actually grows out of her head that color. Who is she? That is the question that haunts her, and she’s about to find out.When beautiful, haunted Akiva fixes fiery eyes on her in an alley in Marrakesh, the result is blood and starlight, secrets unveiled, and a star-crossed love whose roots drink deep of a violent past. But will Karou live to regret learning the truth about herself?

There are so many things to say about this book. This book first caught my attention because of the interesting cover art and the title of the book, In my opinion they are very different from most books and pretty unique. I also wanted to read this book because I wanted to know why sooo many people just loved the book and Laini Taylor.

From the synopsis alone, you aren't given too many clues as to what the book is really about. It could be considered confusing. So you almost go in with an open mind and not clued in to too many secrets. Actually no secrets at all. I typically start a book knowing a lot about the character and their personality because it is given. I will also know what the actual struggle of the book is or the entire problem. Here, you just get a glimpse, a sliver. But you have nooooo idea.

I would like to commend Laini Taylor. I heard she is a very prolific and poetic writer. That can be too much for me sometimes, but I have to say that I absolutely loved it. It did not come off as she was just trying to be poetic, it just flowed that way. Now I would also like to say WHAT THE HELL LAINI TAYLOR! Perhaps I'm just slow, and maybe I wasn't thinking ahead, but she gave such little foreshadowing that when shit hit the fan, I was scrambling around trying to guess what was going to happen AND I COULDN'T. I'm concocting these crazy ideas because I don't know enough, and then boooooommmm. But oh wait. She isn't finished. She gives you the answer to your huge question bit by bit, piece by piece. It's not just oh one sentence and life makes sense. No no no no no. Like 4 chapters and then you might have an idea. Just dropping bombs on us. Its refreshing not to be able guess the ending.

Now for her lovely characters. Karou, a very interesting name to say the least, is secretly special. Because none of the humans knows her family, or at least the ones that raised her. And lets face it, blue hair is cool. But she is a down to earth girl, for the most part, and I love that she's an artist. The location of the book is also interesting because most YA books are not set in Europe for the most part. Enter Akiva with his sexy, fiery, and tiger like eyes. No instalove, but there was a force or attraction between them that brought them together and made them feel a certain way toward each other. And believe me, there is a reason for that. So fret not. But I do like them together. Yeah they are very different and it has that typical forbidden love stamped on it, but it also has something else mixed in there that makes it even more interesting.

Overall I really enjoyed this book and it lived up to the hype in my opinion. The only reason it wasn't 5 stars was due to a section toward the end that kind of dragged for me and confused me a bit. But hey, its sooo worth it
Posted by Unknown at 8:05 AM